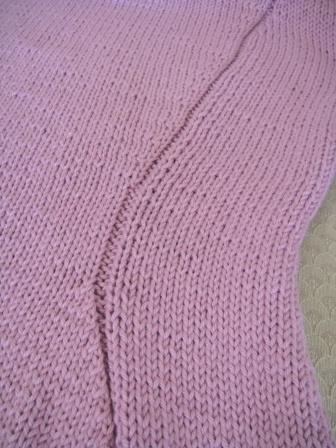 Well, I have my schedule propped in front of me as I type, and it’s kind of reassuring.  This is how I plan to do it:

Week five:  a cushion week for any unaccounted for delays

Week nine:  Start something else… or else have this as another cushion week.

I’m pretty sure that’s it, and I am pretty sure I can do it – there are two buffer weeks in there after all!  I’m hoping it will also give me time to complete a couple of designs I have brewing (as well as do housework).

What you are seeing here is a bit of a released-spring effect.  For the past two months I have been penned in by the school summer holidays.  And now that school has finally started (what a loooooong summer break that one was!), woo hoo!!! I can get on with the knitting thing!!

As you can see, my strategy is to knit one small thing and one large thing at the same time.  By rotating between the two, I will give myself both muscle and mind relief.

The only issue I have at the moment is that my wrists are a bit sore from knitting my daughter’s top.  It’s in cotton.  And that stuff is very.hard.on.the.wrists.  I might have to go slow on it for a bit to give the wrists a rest.

It’s quite an interesting knit.  I don’t really recommend knitting in cotton though.  Aside from the hard-on-wrists aspect, all that decreasing and increasing shows up quite plainly, and wool does a better job of softening those areas.

Here are some of the interesting features of the Sidelines Top by Lou Schiela:

Princess lines.  These are two curving lines going down the length of the body, which have the effect of drawing your eye to the centre of the body.  Very visually slimming.

This is where I’ve got up to on the front.  There are cabled princess lines here, but what is interesting too is the fact that you gradually increase once you have cast on – which is opposite to what one normally does!  See the curving side panel?  That’s all the increases.  And then you decrease (while also decreasing the middle panel) which creates more visual ‘pull in’ and shaping.

I’m fairly sure this top will be extremely flattering to wear.

And now, I’m off to bake a banana cake!

15 thoughts on “Planning it out”

The Catlins is an amazing part of New Zealand. I could spend a lot more time there. #nuggetpoint #cathedralcaves #mcleanfalls